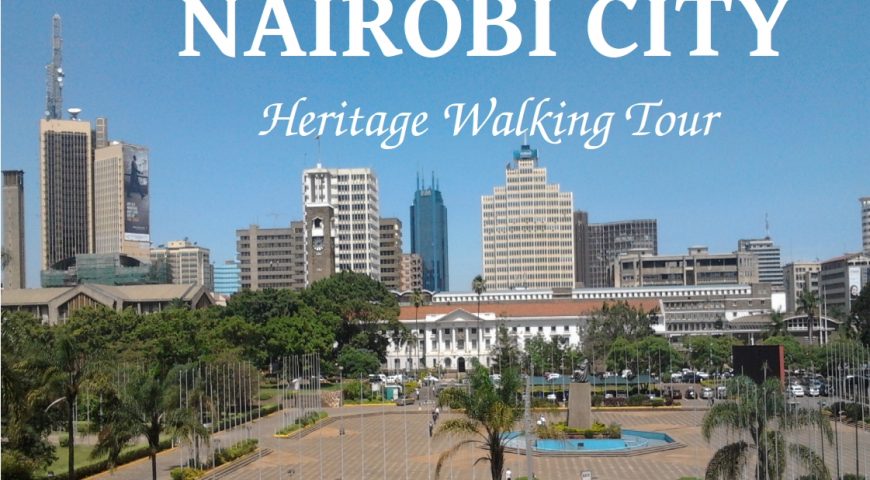 The Nairobi Heritage Walking Tour offers an interactive and wholesome experience to visitors seeking to learn the past times of Nairobi. As you walk through the streets, buildings, monuments and green spaces you get to relive the history of Nairobi. The Nairobi City Heritage Tours comprises of four tours that include; the Harry Thuku Road Tour, the Kenyatta Avenue Walking Tour, the City Square Walking Tour, and the River Road Walking Tour. This was later followed by walking down the Museum Hill through Harry Thuku Road. The road was named after Harry Thuku (a politician and activist in pre-colonial Kenya) and in memory of the shooting and killing of some protesters along the road leading to the Central Police Station demonstrating Harry Thuku’s release where he was held. Other major attractions on the Harry Thuku tour include: Kenya Broadcasting Corporation, Norfolk Hotel, Kenya National Theatre, Nairobi University and Central Police Station.

We entered the Nairobi Central Business District (CBD) while walking along Moi Avenue as we embarked on our City Square Walking Tour. According to our guide, Martin Wahogo (the author of Know Kenya: Pocket Guide Book); The Nairobi Central Business District is rectangular in shape, or to be precise, a trapezoid-like shape boxed in by Uhuru Highway (to the SW), Haile Selassie Avenue (SE), Moi Avenue (NE) and University Way (NW). Its shape is due to the original plan for a railway depot town that developed in front of the railway station. The CBD features many of Nairobi’s important buildings, including;, the High Court, the Parliament building, City Hall and City Square. Due to Nairobi’s two construction booms, one after independence and one during the 90s, today this African city is endowed within an unusual skyline. Other major attractions on the City Square Walking Tour include walks through: Moi Avenue, Posta Road, Kaunda Street, Standard Street, Kimathi Street, Mama Ngina Street, City Hall Way, Taifa Road, Harambee Avenue and culminating at the roof top of the Kenyatta International Convention Centre (KICC). The Khoja Mosque (Darkhana Jamatkhana) was built for the Aga Khan Ismaili Muslims and has had only minor internal alternations since its construction. It was designated by Virji Nanji Khambhaita, a Hindu who came from a community of carpenters known as Gurjar Sutars. Its proper name is Darkhana Jamatkhana – Jamatkhana means “house of congregation” – as originally, most of the rooms were simply set aside for prayer and meditation in the house of the Ismailis. It is a three-storey western looking building, most likely because the Aga Khan of the time specifically exhorted his followers to ‘adopt British and European customs’. The Nairobi Gallery which was the Old PC Building was popularly known as ‘Hatches, Matches and Dispatches’. This building was used to record births, marriages and deaths during the colonial period and is now a national monument. The Kenyatta Avenue Walking Tour has the most gazetted sites and monuments in Kenya that are found along Kenyatta Avenue that include; the Stanley, Cameo Cinema, Westminster House and Pan African House, World War Memorial Statue, World War Memorial Pillar, Stanbic Bank, Bank of India, Galton Fenzi Memorial, Kipande House, Old PC House, Nyayo Monument, All Saints Cathedral, Central Park, and Uhuru Park. Cameo Cinema was formally known as Theatre Royal before the First World War. At one point, it was the seat of the High Court; the Chief Justice and witnesses were accommodated on the stage. During World War II, it became the Garrison Theatre for the benefit of the troops and was later converted to a cinema. Presently, the Cinema hall has maintained its look and is a rental space and is being used by the Nairobi Water Company. The Galton – Fenzi Memorial Monument is a significant monument in Kenya and marks the pivot point of Nairobi and all distances from Nairobi are measured from this point. The monument was erected by the Royal East Africa Automobile Association in memory of Lionel Douglas Galton – Fenzi (1881-1937), the ‘Father of African Motoring’. He was the first man to drive from Mombasa to Nairobi in 45hours in 1926, when the road was still a dirt track.

The World War Memorial Monuments: The statue (1927) is that of three larger than life African men -two of the three are clearly Askaris, one representing the Kenya Armed Rifles and the other the Arab Rifles. The third is a member of the African Carrier Corps, from which the Kariokor area of Nairobi got its name. (Kariokor was the first housing scheme for Africans attempted by the Nairobi City Council). This statue commemorates the over 112,000 Africans who were involved in the wars and a further 200,000 Kariokor (Carrier Corps) who supported the European fighting forces. Rudyard Kipling’s words are inscribed on the statue in honour of the three types of soldiers who died in the World War: “This is to the memory of the native African troops who fought to the Carrier who were the feet and hands of the Army, and to all other men who served and died for their King and Country in Eastern Africa in the Great War, 1914-1918. If you fight for your country, even if you die, your sons will remember your name”. These words are also written in Swahili and Arabic. The years 1939-1945 were later added on the pedestal to include those who died during the WWII. The obelisk is a memorial to the dead of the two world wars. The Bank of India was previously known as Memorial Hall and was initially occupied by the Legislative Council, earning it the name LegCo, from 1924 until 1954. LegCo was the colonial version of the Parliament, originally consisting of appointed white members and a few Asians. Currently owned by the Government of India on a 99-year lease, the building has housed the Bank of India since 1965. Due to time, we didn’t take part in the River Road Walking Tour that traces the origin of Nairobi City and the immense contribution of the Asian community to Nairobi’s development. The tour commences from the Kenya Railways, August 7th Memorial Park via Haile Selassie, The tour goes through Racecourse Road, Uyoma Street, Ronald Ngala Street, Tom Mboya and Moi Avenue. Contact us via info@beadsafariscollection.co.ke or call 0717110803 to book a guided tour. The Nairobi City Heritage Walking Tour must be on your bucket-list if you reside or plan to visit Nairobi as you will learn the significance of each street, the people who helped shape the present-day Nairobi, the culture of Nairobi in an easy and relaxed walk.