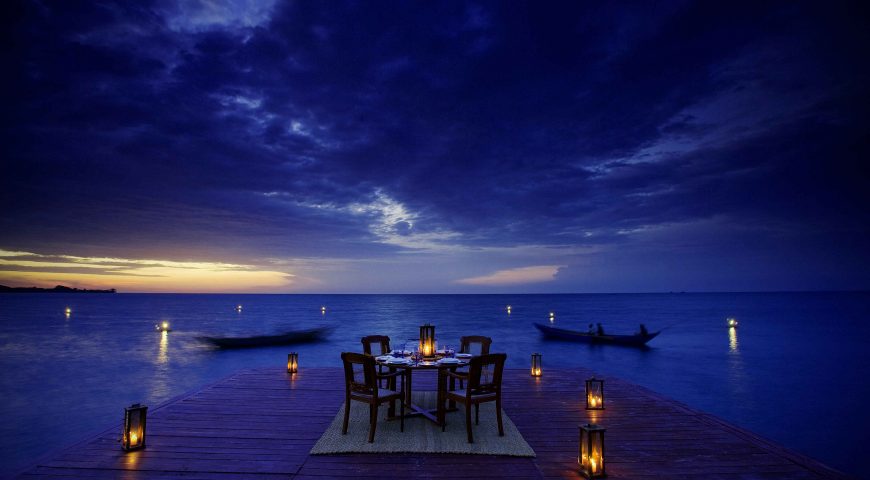 The flight from Nairobi to Kisumu was breathtaking, the aerial views of the Great Rift valley system and lake shores was magical. Upon arrival at the Kisumu International Airport, our guide and taxi drove us to the Luanda Kotieno beach which took about one and a half hours. We waited at the lounge and when the ferry arrived it took us about 45minutes to get to Mbita. One of the local passengers was kind enough to explain how the ferry operates and the names of the different islands in the horizon.

We found the Rusinga Island Lodge driver waiting for us patiently, as he loaded our luggage onto their minivan. We arrived at the lodge 10minutes later, as the evening breeze from the lake brushed through my hair.

As we checked in, the waiter served us a glass of refreshing orange juice with a warmhearted smile. He thereafter carried our luggage to our cottage. The semi-living room had stylish interiors that included; warm white seats, white cotton curtains and white walls that blended in well with the wooden posts. The river stones and makuti thatched theme ran through the ensuite cottage and the bathroom had natural stones incorporated in the showers walls and wooden barks have been used on the base of the toilets.

After the much needed shower after a long journey, we headed for dinner that had been set up in the restaurant. We later retired for the day after a hearty 3-course meal.

At sunrise, we decided to take a stroll along the lake shore. Our cottage had a commanding view of the lake. Lake Victoria is the world’s 2nd largest freshwater lake; there were hammerkops foraging on the shores, further on were common terns perched on a wooden bar that groomed themselves in readiness for the day and an African pied kingfisher was hovering over the lake shore awaiting breakfast.

We were very fortunate to spot two juvenile water thick-knees and an adult in some nearby bushes near the water’s edge. The thick-knees were such a delight to watch, their large glaring large yellow eyes, stout bill, long greenish-olive legs and feet and buff wing-covert edges were the highlight of our morning stroll.

Hand-in hand, we headed to the restaurant for our breakfast, freshly made pastries and coffee were the right boost to kick start our day. Thereafter, we walked on the jetty and embarked on our speed boat and headed out for our tour.

Our guide and captain, elaborated that the main economy of the people living on the islands was fishing. As we disembarked on our boat at the Litare Fishing Village, we came across women drying fish on the ground and some men repaired fishing nets in preparation for the next catch.

Litare fishing village is one of the many fishing villages on lake Victoria. After our brief guided walk we embarked on our boat and headed to birds island. Enroute we found two fishermen casting lot of their nets to catch fish which was quite breathtaking.

As we approached Birds Island, we could see hundreds of egrets, sacred ibis and comorants. A closer glimpse offered an opportunity to see monitor lizards mating on the rocky outcrops and an African fish eagle soaring overhead.

Our lunch had been prearranged and as we approached the white sandy shores of Takawiri Island, we found everything had been perfectly laid out. Our table had been set on the lush green grass on the Island offering majestic views of the surrounding islands and the lake.

Thereafter, we returned to Rusinga Island Lodge and relaxed outside our cottage’s verandahs ideal for our evening siesta sipping on cocktail drinks. The lodge’s management went out of their way to set up a romantic candle-lit dinner for us on the jetty. The walkway was lit with candle sand bags that led up to our table. Our starters, main meal and dessert were filling, tasty and tantalizing.

The next day after breakfast, we headed to the Tom Mboya Mausoleum that was gazetted as a national monument on March 9, 2001 because of Mboya’s contribution to Kenya’s independence struggle. It was built two years after his death and thousands of visitors flock to the site annually to learn about the life of a man whose brilliance and outstanding contribution to Kenya’s independence is still revered. Inside the mausoleum; there is a Bible with the holy water on top, which Mboya was given as a souvenir when on his honeymoon in Israel in 1962. Also preserved for posterity is the black nameplate, a souvenir from the Chinese Government, that stood on the minister’s desk amongst other collectables.

After lunch, we lazed in the lodge and decided to take a dip in the swimming pool. Thereafter we went for our treat of the day to the Rusinga Spa that’s adjacent the pool. We soaked in the jacuzzi and we were rewarded with the much needed massage. Our masseur combined a blend of scrubs, wraps and Indian head massages and this set the mood to retire in our cottage for the rest of the afternoon.

Our brief Rusinga Island getaway was drawing to a close and we were sad but filled with wonderful memories from our escapades the next day as we headed for our transfer to the Kisumu Airport. Contact us via info@beadsafariscollection.co.ke for deals on romantic and honeymoon destinations on Kenya’s West Coast today.